The relative age effect (RAE) describes the difference in children who are the same chronological age but have different developmental ages. The technical definition is "an observable effect resulting from a relationship between chronological age and an eligibility cut-off date used for cohort selection." In sport development this difference can be a problem when we don't account for it in team selection, and opportunities for practice, coaching, and competition.

RAE leads to a selection bias for older athletes because maturity is mistaken for ability. When younger athletes gets less attention and fewer opportunities for participation these youngsters either dropout of the activity or suffer from an overall lack of development when compared to their older counterparts. This reduces the talent pool, which is felt years later when the number of candidates for national teams is small and real talent becomes hard to find.

Older athletes are bigger and seem to have higher levels of strength, speed, and coordination. All of which are related to maturity.

The effect is quite normal and can be found in almost any cohort of children based on an annual selection period. Those born early in the period will have an advantage over those born later. Parents and teachers can relate stories about varying rates of growth between youngsters in the same family or classroom. We can't battle the RAE but we can and should implement steps to mitigate its effects

RAE lingo uses quarters (Q1, Q2, etc.) when discussing age cohorts. Q1 children are older than Q4 children because they were born early in the selection period i.e. during the first quarter. These differences disappear as children age but the damage is done in many cases early on because the RAE is not considered when children are selected for sport teams, praised for their ability, or offered advanced coaching. The "younger" athletes are sidelined because they are perceived to be less talented than their "older" peers when ability has nothing to do with theirs skills at all.

The effect of the RAE on sport performance can be profound thus it is often thought of as a sport issue. But the RAE results from a child's normal growth process and appears in any kind of data set that measures growth factors like height and weight.

USSA Malaysia's Performance Data Project has collected an extensive database of over 40,000 measurements for Malaysian children ranging in age from 8 to 17. These records were collected by students in the 2014 cohort of the International Diploma in Physical Education and Sports Coaching program. Each student was tasked with collecting biometric measurements and performance data from 50 children between the ages of 8 and 17.

The full study analyzed cohorts for: 8-, 9-, 10, 15-, and 16-year-olds. For the 8s, 9s, and 10s we expected to find evidence of the RAE. For the 15s and 16s we hypothesized that the effect would be far less noticeable since growth patterns would have leveled out by these ages. Both biometric and performance data was analyzed. Biometric data included height and weight. Performance data included times for a 50 m run and a flexed-arm hang. The performance tests give us measures of speed and upper body strength.

The full report is not complete but we do have enough data to illustrate the RAE at young ages.

In this study ages were calculated directly from a child's Malaysian IC number which has both birthdate and sex encoded into it. Subjects were then ranked by age within each single year grouping and divided into quarters based on age on the date of testing. Q1 included those born in January, February, and March and represented the youngest group; Q4 consisted of those born in October, November, and December and were the oldest in each cohort.

It should be noted that this analysis is based a child's actual age and is not relative to any artificial selection period. The idea remains the same however and it may be easier to understand the problem inherent with the RAE if the mental gymnastics of calculating ages based on rolling calendars can be eliminated by looking at actual ages and analyze children according to birth rank within the single-year cohort.

Means were calculated for height and 50 m run times. These means were then charted and the results can be seen in the figures below.

The relative age effect is easily noticeable for 8-year-olds for both height and 50 m running times. Figures 1 and 2 show the average height of 8-year-old girls and boys. The tallest children are clustered in the Q3 and Q4 quarters; these are also the oldest children.

8-year-old girls showed an average difference in height of 2 cm between Q1 and Q4 while 8-year-old boys showed over 3 cm difference. 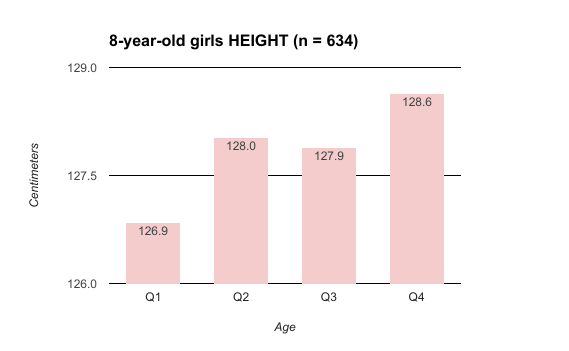 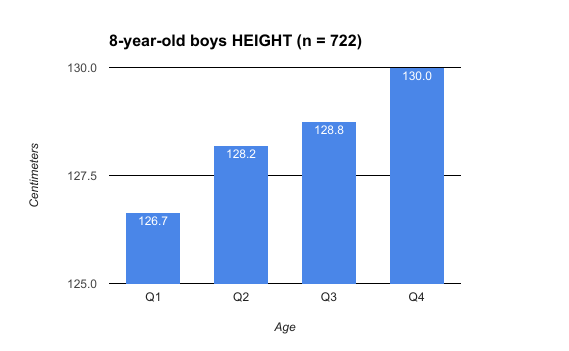 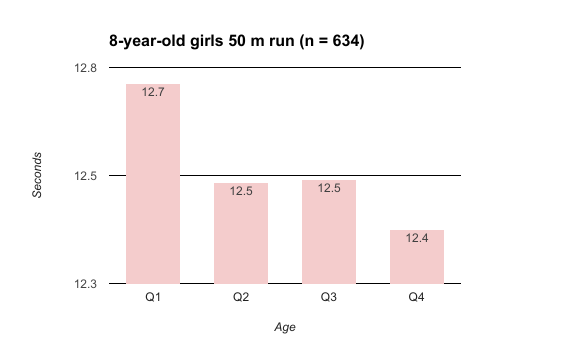 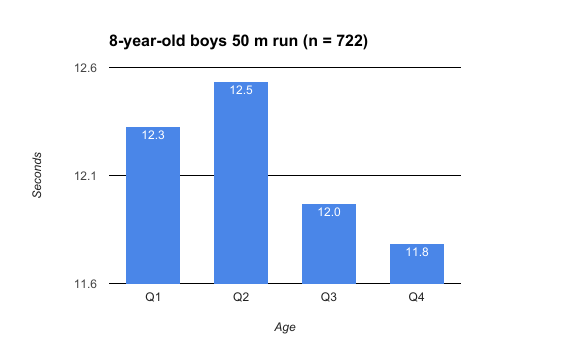 If you have the data and the time the relative age effect is very easy to show on a chart. And it is not unusual, it happens everywhere that groupings are based on chronological age.

The effect of the RAE can be extreme at young ages but lessens as children get older until it eventually disappears. But development that occurs in the younger years is the most critical and knowing that the relative age effect exists and is an a priori part of life means that coaches, administrators, and parents must try to mitigate its effects on young child athletes.

Fear of missing out is hurting youth sports - 22 October 2018

Who won the Malaysia Games? Selangor, but Terengganu is the real star of the show! - 01 October 2018

Is talent identification even possible? - 17 September 2018

Who won the Asian Games? USSA Malaysia fires up its research department for another riveting analysis - 10 September 2018

Does Malaysia need the Podium Program? Yes, but it also needs something more - 20 August 2018

The youth sport talent illusion: How we confuse early-maturers with good athletes - 13 August 2018

Naturalized footballers: Is it really the Malaysian national team if the players aren't Malaysian? - 06 August 2018

The tip of the iceberg: What are we seeing when we watch elite sport performances? - 30 July 2018

Who is responsible for athlete performance: Athletes, coaches, or committees? - 18 June 2018

Creating a culture of achievement in sport - 05 June 2018

Sport development in the headlines (sort of): Is Malaysia really serious about revamping their sports system? - 28 May 2018

The daily mile: Can this simple yet brilliant idea help improve fitness at your school? - 07 May 2018

The Podium Program: One of the bright spots in Malaysian sport - 01 May 2018

Who won the Commonwealth Games? A points analysis of the Gold Coast games - 23 April 2018

Is it possible to win the Commonwealth Games? Why '10th place or better' is not a good goal for the Malaysian team - 09 April 2018

Is anybody really interested in the medals target for Malaysian athletes in the Commonwealth Games? - 19 March 2018

What can Malaysia learn from Norway about sport development? - 05 March 2018

More efficiency tips for coaches: Dealing with more than one email address and other communication ideas - 26 February 2018

Efficiency tips for coaches: What can you do to work more efficiently? - 19 February 2018

Sport clubs are the lifeblood of national sport development. They need help from sport associations to do their job. - 15 January 2018

YES! Malaysia is starting to talk about sport structure! - 08 January 2018

Why are there no local coaches to take Zhuliang's place? - 25 December 2017

Sometimes taking risks is the only way to improve: Take a chance! - 18 December 2017

How we calculate age can have benefits, and consequences, in youth sports - 11 December 2017

What is bio-banding? Can it help reduce the relative age effect in sport? - 04 December 2017

Great expectations: Expect more, get more! What we learn from raising the bar in sport performance - 14 November 2017

You're out! BAM eliminates players from Super Series and Grand Prix Gold tournaments unless they join BAM program - 10 October 2017

Is American football about to meet its Waterloo? - 02 October 2017

Can we please forget about ways to identify talent and just work on getting more athletes? - 07 August 2017

The difference between sport and energy drinks - 31 July 2017

Training for performance vs. exercising for weight loss. Yes, there's a difference! - 03 July 2017

Visualization and imagery in sports - 05 June 2017

Young, single-sport athletes suffer more injuries and do not reach their full potential - 29 May 2017

Transformational vs. transactional coaching - 23 May 2017

Will they come back tomorrow? The most important KPI for youth sport coaches - 08 May 2017

Some thoughts on the National Football Development Plan - 18 April 2017

Is VIP leadership of sport associations a good idea? - 22 March 2017

What happens after an athlete's initial introduction to sport? - 27 February 2017

"Where do athletes come from?" A paper presented at the Kuching sport psychology conference - 16 January 2017

Individualism vs. collectivism in sport - 26 December 2016

Developing sport from the ground up: How does the process really work? - 05 December 2016

Pay for what you want: Why less government funding may be the best strategy for sport development - 21 November 2016

Physical literacy or physical education: Which is it? - 31 October 2016

What is a therapeutic use exemption and is it cheating? - 03 October 2016

The attrition and transformation models of sport development - 05 September 2016

A sport development system vs. just being lucky - 08 August 2016

Malaysian youth are not overweight, but they're not active either - 15 February 2016

Cycling coach hits the nail on the head - 5 February 2016

What does a declining population mean for sport? - 2 February 2016

REMINDER: Deadline to register for convocation is 27 November! - 25 November 2015

When should athletes specialize in a single sport? - 11 September 2015

Playing football in class is not physical education - 29 June 2015

Assignments highlighted in red need to be resubmitted - 30 May 2015